Smash, clobber and bash the murderous legends of Slavic mythology in this darkly funny action role-playing game that changes every time you play. Play as Ivan, a one-handed blacksmith with incredibly bad luck, who must take on the impossible tasks given to him by the tzar. All the while the mysterious witch, Baba Yaga, watches over Ivan's fate.

When we started brainstorming for ideas for a new game, we decided to mix our love for roguelikes with our love for narrative and choice based games. Then memories of fairy tales that brightened our childhoods started flowing - magical, charming, gloomy or funny, scary, moody, surprising or cruel. These were not your regular tales of Snow White and Little Red Riding Hood, but of Baba Yaga the witch, Koschei the Immortal and Vasilisa the Beautiful. Thus, Breadcrumbs was born to lead players into these worlds, and we decided Yaga would be our first game. With each piece of code, with each sketch and each brushstroke we felt our vision coming to life and we hope our passion managed to seep its way inside the game as well.

Yaga was launched in partnership with Versus Evil on Apple Arcade, Xbox, Playstation, Nintendo Switch and Epic Games Store. After a while, we also launched on Steam and GOG, together with the big "Spirits for Spirits" update.

In October 2021 we released the "Root of Evil" expansion, containing a big new storyline, new characters, new quests and new secrets to discover. 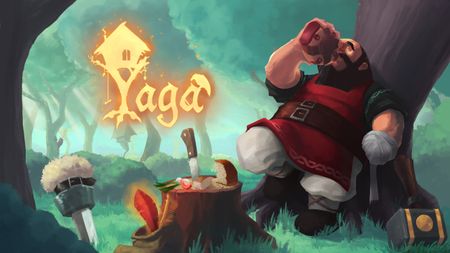 Boilerplate
We love combining dark humour, quirky characters and charming art to create worlds that you can get lost in. We made Yaga, a slavic folktale RPG. Now working on Monster Therapy.
More information
More information on Breadcrumbs Interactive, our logo & relevant media are available here.